LATEST ISSUEARCHIVESABOUT USFAQ
Thank you! Your submission has been received!
Oops! Something went wrong while submitting the form. 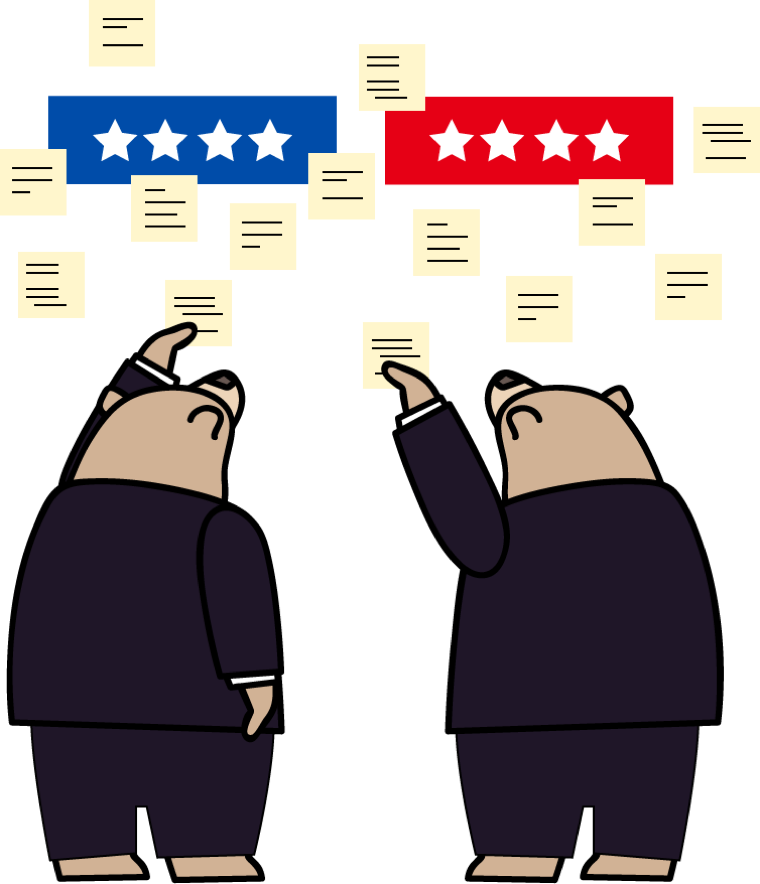 We’ve been getting some feedback about our decision to step back from our regular coverage this week, so we want to briefly explain our reasoning. We’re curators, not reporters; we don’t report on breaking news. As of now the votes are still being counted; there’s no value-add in us simply repeating the numbers.

As the votes come in, projections are being made both by TV networks and others, but it’s important to note that those calls don’t always align with each other, and are of course only estimates of what the final results will be when the votes are fully counted. We’d rather not speculate about potential results given that we’ll have the actual numbers in a few days. We know many are worried about the accuracy of the vote counts and/or the smooth transition of power, but those issues will be adjudicated through our legal and constitutional processes in the coming weeks, and until more information is known any analysis of the situation is premature.

At this incredibly intense juncture in our politics, we urge everyone to exercise patience. Below is our final set of recommendations. Today we’ve focused on America: our heroes, politicians, and lore.

This is a documentary about the 1968 convention debates between conservative intellectual William F. Buckley, Jr., and liberal intellectual Gore Vidal, and the wider scope of national events at the time. It's a largely balanced and mostly accurate look at the times, but more importantly, it allows the viewer to get to know Buckley and Vidal on a personal, non-political level, and that's something we certainly need to be able to do in these times, to see those with whom we disagree as still unfailingly human.
- Joe Vigliotti

In this epic historical series, the lives and trials of U.S. Marines through the course of the Pacific Theatre of World War II are portrayed in gritty, heart wrenching detail. A fitting and just partner to the original Band of Brothers, The Pacific demonstrates the true depths of American patriotism, courage, and honor, as well as the absolute horror of combat.
- Joe Vigliotti

A cabbage farmer turns double agent in this period drama set in 1778. Based on real events (though of course some liberties are taken), it’ll have you on the edge of your seat at the end of nearly every episode. I’ve watched the full series more times than I care to admit, and still get chills when George Washington makes his first appearance.
- Annafi Wahed

Winner of four 1993 Academy Awards including Best Picture and Best Director (Clint Eastwood), this film tells the fictional story of William Munney, a retired outlaw who has forsaken violence and lives alone on a farm with his son. Munny reluctantly agrees to assist an aspiring gunslinger with a job, and heads for a small town ruled with an iron fist by a corrupt sheriff. Will Munney succeed in atoning for the misdeeds of his prior life?
- Jihan Varisco

While this book is a marathon more than a sprint (I am not finished with it myself), McCullough writes a fascinating portrayal of the life of President Truman. I picked it up solely for insight into the decision to kick off the Atomic age in 1945, but there are many other interesting anecdotes.
- Ken Schneider

This biography covers Roosevelt’s life up to his ascent to the presidency. Roosevelt’s larger-than-life story includes his foray into ranching (he moved west for health reasons), his start in politics, and his iconic charge up San Juan Hill during the Spanish-American war. This book is full of fascinating details that aren’t covered in history class.
- Jihan Varisco

There are robust debates going on about the state of our nation, and whether our democratic systems and processes need reform. While our founding fathers surely did not have all the answers, it’s well worth our time to understand the origins of our current system, explained by those who created it.
- Annafi Wahed

This two-player game simulates the Cold War between the US and the USSR. Play as one of the two great powers and compete for influence around the world while dealing with randomized events, all while attempting to avoid escalation into nuclear war.
- Jihan Varisco

Catchafire matches professionals who want to donate their time with nonprofits who need their skills. They have hundreds of volunteer projects for every skill, time commitment, and cause area. Find the one that excites you – and complete it virtually.
- Sophia Augustine

On the bright side...

The most popular Thanksgiving side in every state

Thank you! Your submission has been received!
Oops! Something went wrong while submitting the form.